360-degree reviews are gaining traction in how organizations measure their employees’ strengths and track development — and it’s understandable why.

Traditional performance appraisals have a bad rap as a pointless, frustrating tool. Consider what our research found when we asked both managers and employees for the number one reason they dislike performance reviews:

Given these facts, the 360-degree survey appears to be a godsend. These reviews ask employees across the organization, including peers, supervisors, and subordinates, to assess the employee. Some reviews may even go outside the organization and ask clients or customers for feedback.

So what’s the catch? While 360-degree surveys are an attractive solution to the performance review crisis, they come with their own set of problems. Here are eight disadvantages to relying on a 360 review process:

01. Focus on the individual

In a world that increasingly values collaborative work and project teams, 360-degree reviews are out of sync because they measure individual performance.

Maury Peiperl, a researcher from Cranfield University in England, found in his research that both high-performing and low-performing teams are unenthusiastic about peer appraisal systems for that reason. He notes that “if most work is done in groups, focusing on individuals can compromise the group’s performance or make a weak team’s performance even worse.”

If the bulk of an employee’s work is collaborative, it makes more sense to evaluate the group performance, rather than focusing on the individual.

While crowdsourced feedback can be helpful in understanding an employee’s complete performance, it’s inherently flawed because it’s not coming from people trained to evaluate other people.

Often, survey questions elicit opinion-based answers rather than performance-based responses, so personality problems can worm their way into a performance review. Coworkers who are competitive could exploit the review to complain about issues that aren’t necessarily related to an employee’s performance or development. Employees who don’t like a manager’s leadership style may use the review as an avenue to seek retribution. In either case, the review favors personality-related comments over performance-related feedback.

Feedback without follow-up is useless, something that’s true of all performance reviews.Eric Jackson, the founder of Ironfire Capital LLC and a management expert, notes that “360 data is only helpful to the extent that it gets acted upon and used. The majority of programs we see simply give the feedback and then it gets swiftly forgotten.”

Unfortunately, the sheer number of people involved in the review process and the frequency of the review cycle limits the possibility for follow-up. An employee might read the feedback they receive, hit delete, and give it no more thought. 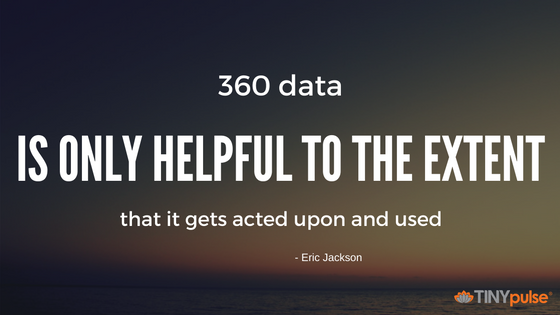 Marcus Buckingham, an expert on performance management, underscores a structural problem with 360 reviews. Most 360 reviews rely on a similar formula: creating a set of competencies and behaviors, then rating the employee on those aspects of their performance.

Buckingham argues that asking reviewers to consider common statements like “this employee sets a clear vision for the team” actually results in subjective data because the reviewer invariably ends up comparing themselves to the person being reviewed. Each rater brings their individual biases into the process, skewing the data in different directions.

Workplace culture matters when it comes to reviews. If problems are endemic to your culture, this might surface in reviews, which become less about the employee and more about the mood of the company. For example, in a company where rounds of layoffs have lowered morale, a supervisor might be negatively reviewed by subordinates who feel the supervisor isn’t doing enough to prevent layoffs, even if that’s beyond the person’s power.

Management consultant Dave Logan suggests assessing your work environment first and feeling secure in that assessment before embarking on a 360-degree feedback survey. 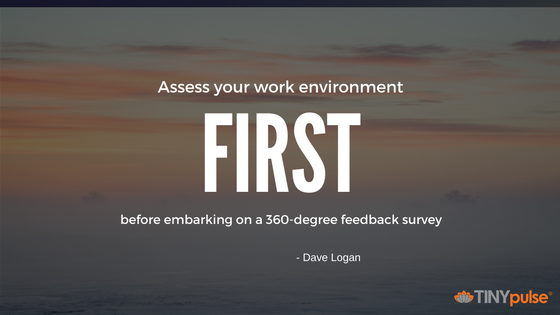 Because the 360-degree review process involves so many stakeholders by definition, no one person or department takes ownership of the process. Even if the human resources department is overseeing the rollout of the survey, they can’t be expected to follow up with every single employee. This seriously hampers the effectiveness of the review to act as a development tool, giving it the feel of a one-time pulse check.

Unlike annual (or semiannual) performance reviews issued by a direct supervisor, 360 reviews aren’t structured for goal setting, meaning there’s no real way to measure an employee’s success in addressing shortcomings or surpassing expectations from a previous review cycle.

Unless there’s someone who is sitting down with each employee and comparing multiple sets of reviews over time, the reviews are essentially disconnected from any goals the employee may have in the same time period.

More than likely, the reviewers have no insight into what the employee wanted to accomplish — and are only rating the employee on what they did, not what they had set out to do. 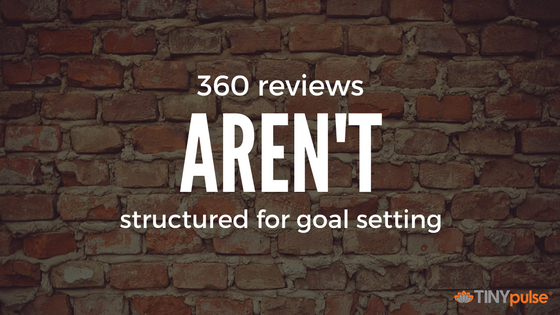 Snapshot data can be helpful in capturing trends, but 360-degree reviews are a lengthy process. Asking five or more people per employee to fill out a survey adds up over time, especially if reviews are given multiple times in a year. Moreover, the review’s value diminishes if it’s not a tool that produces measurable results and helps develop employees.

While traditional supervisor-to-subordinate reviews do get a bad rap from employees, you may want to think before you switch over to a totally crowdsourced format. Peer-to-peer appraisal can have a place in your review process, but these time-consuming, subjective, and loosely structured surveys don’t necessarily produce results that managers can use to develop and motivate employees.

They also don’t measure the true indicators of performance that employees say they want in a review. While employees might be happier to get feedback from multiple sources in the short term, these crowdsourced reviews will hurt them and your organization in the long run.

Editor’s Note: This post was originally published in July 2015 and has been updated for freshness, accuracy, and comprehensiveness.